What Frame Are You?

Wood light frame construction is the most versatile of all building systems.  There is scarcely a shape it cannot be used to construct, from a plain rectilinear box to cylindrical towers to complex foldings of sloping roofs with dormers of every description. During the century and a half since it first came to use, wood light framing has served to construct buildings in styles ranging from reinterpretations of nearly all the historical fashions to uncompromising expressions of every 20th-century architectural philosophy. It has assimilated without difficulty during this same period a bewildering and unforeseen succession of technical improvements in building: central heating, air conditioning, gas lighting, electricity, thermal insulation, indoor plumbing, prefabricated components, and electronic communications. 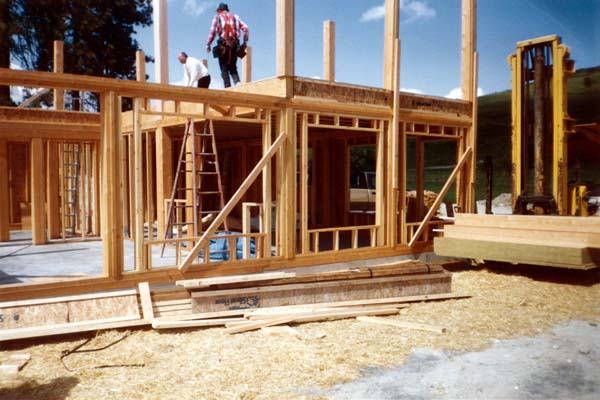 Light frame buildings are easily and swiftly constructed with a minimal investment in tools. Many observers of the building industry have criticized the supposed inefficiency of light frame construction, which is carried out larghely by hand methods on the building site, yet it has successfully fought off competition from industrialized building systems of every sort, partly by incorporating their best features, to remain the least expensive form of durable construction. It is the common currency of small residential and commercial buildings in NorthAmerica today.

Wood light frame construction has its deficiencies: If ignited, it burns rapidly; if exposed to dampness, it decays. It expands and contracts by significant amounts in response to changes in humidity, sometimes causing chronic difficulties with cracking plaster, sticking doors, and buckling floors. The framing itself is so unattractive to the eye that is seldom left exposed in a building. These problems can be controlled, however, by clever design and careful workmanship, and there is no arguing with success: Frames made by the monotonous repetition of wooden joints, studs, and rafters are likely to remain the number one system of building in North America for a long time to come.

by:
Posted by Resource Development at 9:53 AM No comments:

Email ThisBlogThis!Share to TwitterShare to FacebookShare to Pinterest
Labels: fundamentals of building construction

C & E General Contractors, Inc. highly recommends Clean As A Whistle for your carpet and fabric cleaning. They have been in business 28 years, today, and are experienced in all flooring and fabric types as well as every soiling condition known to the industry. Not only do they have a great reputation - education is only one of their strong attributes.

Clean As A Whistle is certified by the IICRC, the Institution of Inspection, Cleaning, and Certification - the world's most recognized body of certification for Carpet and Upholstery cleaners holding multiple Master & Journeymen Cleaning Technician designations. Clean As A Whistle's cleaning systems are the most advanced on the market getting MAXIMUM SOIL REMOVAL and MAXIMUM SPOT REMOVAL without leaving a sticky residue or over-wetting your carpet.

They are a company you could trust...

Make sure to tell them, Mark McNulty with C & E General Contractors  referred you!

Posted by Resource Development at 10:34 AM No comments: